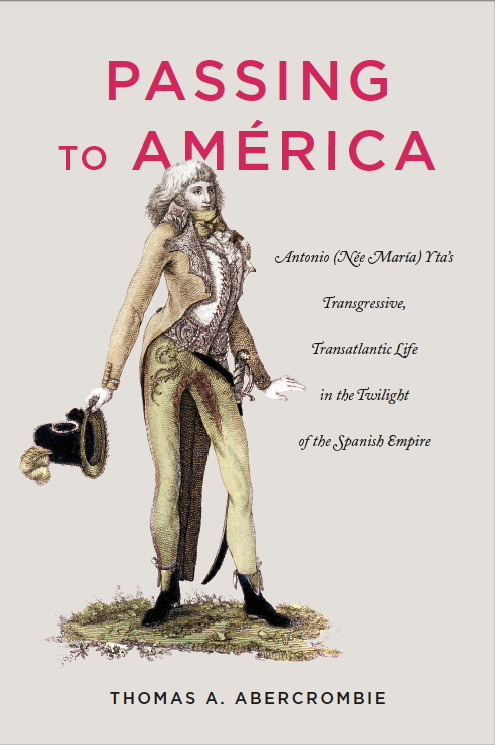 In 1803 in the colonial South American city of La Plata, Doñ, a Martina Vilvado y Balverde presented herself to church and crown officials to denounce her husband of more than four years, Don Antonio Yta, as a “woman in disguise.” Forced to submit to a medical inspection that revealed a woman’s body, Don Antonio confessed to having been María Yta, but continued to assert his maleness and claimed to have a functional “member” that appeared, he said, when necessary.

Passing to América is at once a historical biography and an in-depth examination of the sex/gender complex in an era before “gender” had been divorced from “sex.” The book presents readers with the original court docket, including Don Antonio’s extended confession, in which he tells his life story, and the equally extraordinary biographical sketch offered by Felipa Ybañez of her “son María,” both in English translation and the original Spanish. Thomas A. Abercrombie’s analysis not only grapples with how to understand the sex/gender system within the Spanish Atlantic empire at the turn of the nineteenth century but also explores what Antonio/María and contemporaries can teach us about the complexities of the relationship between sex and gender today.

Passing to América brings to light a previously obscure case of gender transgression and puts Don Antonio’s life into its social and historical context in order to explore the meaning of “trans” identity in Spain and its American colonies. This accessible and intriguing study provides new insight into historical and contemporary gender construction that will interest students and scholars of gender studies and colonial Spanish literature and history.