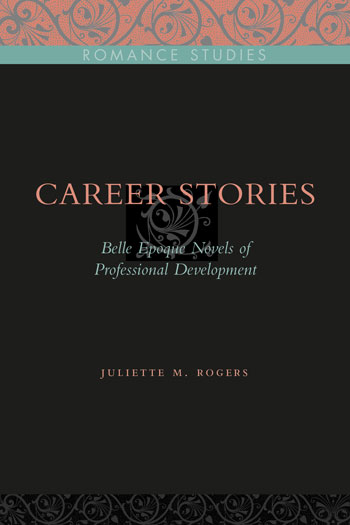 Affiliation: University of New Hampshire, US

In Career Stories, Juliette Rogers considers a body of largely unexamined novels from the Belle Époque that defy the usual categories allowed the female protagonist of the period. While most literary studies of the Belle Époque (1880–1914) focus on the conventional housewife or harlot distinction for female protagonists, the heroines investigated in Career Stories are professional lawyers, doctors, teachers, writers, archeologists, and scientists.

In addition to the one well-known woman writer from the Belle Époque, Colette, this study will expand our knowledge of relatively unknown authors, including Gabrielle Reval, Marcelle Tinayre, and Colette Yver, who actively participated in contemporary debates on women's possible roles in the public domain and in professional careers during this period. Career Stories seeks to understand early twentieth century France by examining novels written about professional women, bourgeois and working-class heroines, and the particular dilemmas that they faced. This book contributes a new facet to literary histories of the Belle Époque: a subgenre of the bildungsroman that flourished briefly during the first decade of the twentieth century in France. Rogers terms this subgenre the female berufsroman, or novel of women's professional development.

Career Stories will change the way we think about the Belle Époque and the interwar period in French literary history, because these women writers and their novels changed the direction that fiction writing would take in post-World War I France.